The Minnetonka Chamber Orchestra (MCO) offers members the opportunity to play their instruments, explore a variety of music and perform in the community. Directed by Lara MacLean, the smaller size of the chamber ensemble is well-suited for performance venues with limited space or capacity and typically consists of strings, woodwinds in pairs, and sometimes brass. As a chamber orchestra, the MCO focuses on musical literature from the Baroque, Classical, and early Romantic periods, and music written in later periods for smaller orchestral ensembles. Previously called the Minnetonka Civic Orchestra, the ensemble remains non-auditioned and presents three concert series each year.

​Rehearsals​
We rehearse Monday nights from 7 - 9 p.m., September through May, at the Arts Center on 7 at Minnetonka High School.

The MAM Office is open Mon, Wed, and Thurs during the schoolyear

and by appointment in the summer.​

We may be reached via email or voicemail 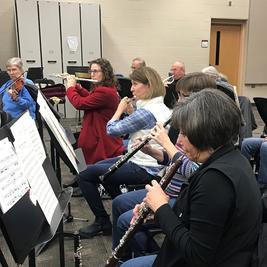 The Community Destination for All Who Love Music